After Trey’s afternoon nap yesterday we headed down to Memorial Park. This park on the southside has a playground, baseball fields, a pool, and a rec center. A highlight of our little romp was when Trey decided to go push the teenage girls on the swingset. At one point one of the girls exclaimed “I think yo’ little white boy just wants to touch some black booty!” I didn’t have a comeback. 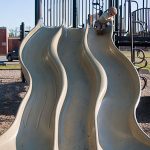 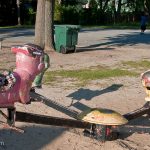 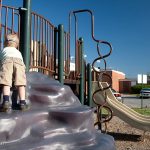 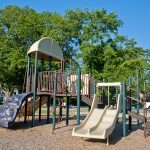 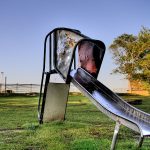 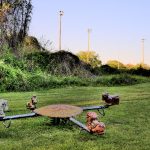 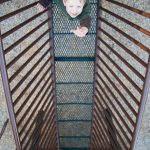 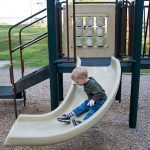 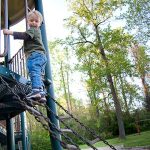 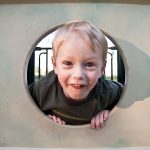 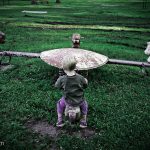 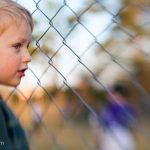 After our last unfortunate Macon city park visit, Trey and I headed to the rich part of town to Henry Burns Park (perhaps he was a relative of the rich, not-so-benevolent Charles Montgomery Burns?).With Heidi sleeping during the day it was best to get our little boy out of the house so she could have some peace & quiet.

Henry Burns is nice, little park with not only a playground but a tennis court, and dirt, basketball half-court. There’s plenty of open space to run around and little yellow flowers were blooming all over the grass.

With all the rain we’ve had (and with more on the way), the skies were pretty cloudy. This always makes for nice photo ops and I got quite a few “cute’ns” of Trey. 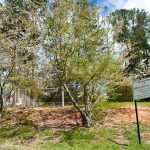 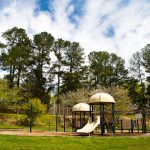 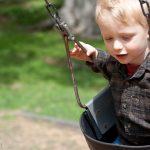 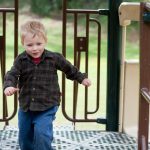 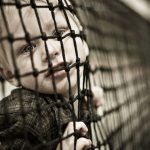 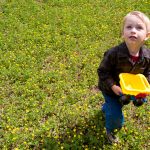 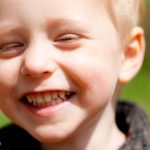 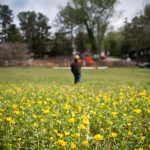 I’ve mentioned before how many great, little city parks Macon has and we’ve been making the rounds checking them all out. Today, Trey and I headed to the southside of town to find Village Green Park.

I had never been to this part of town and it was very obvious that the neighborhoods were struggling. There were lots of abandoned, boarded up homes and lots of people loitering on street corners and in driveways. The park is in an open area behind a circle of homes about 1/3rd of which were abandoned. There was also evidence that an arsonist must live in the neighborhood. A nearby vinyl fence had a massive hole burnt in it and some of the playground slides showed evidence that fires had been started on them. But hey, even if it is in a shady part of town a playground is a playground… right?

Not quite. After we’d been there about 10 minutes a group of young men who had been hanging out & smoking on the other side of the park approached us. One of them asked me if I smoked – he had cigarettes to sell. I said no and mentioned that it isn’t good for your health. His follow up question was if I smoked “green” – apparently they hadn’t noticed the “Drug Free Zone” sign at the entrance of the park. I pointed out I was just there to let my boy play on the playground and not interested in purchasing anything. As they walked off, Trey called out to them: “Big boys come back! Come play!”. They ignored him.

I let Trey play a little longer but finally drew the line when he held up a broken beer bottle he found under the playground set. I started to look closely at the mulch around us and realized it was full of shards of glass (being from brown beer bottles it blended in quite well). We left and I took Trey to Chick-fil-a where he had a great, safe time and the only drug pushed was delicious soft-serve ice cream.

Here are some pics (that didn’t make the video) from last night. You’ll see that Trey is enjoying the rides more and more. He’s also brave – he went on several that were pretty fast and bumpy and had the time of his life. On the caterpillar mini-rollercoaster the older kids were holding their hands up in the air and screaming so Trey joined in – laughing away the whole time. 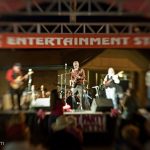 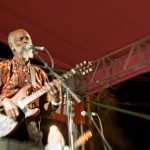 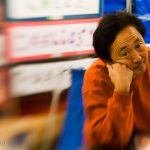 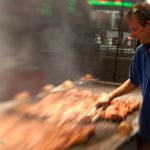 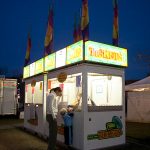 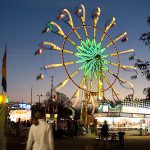 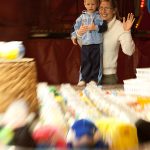 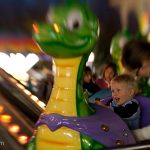 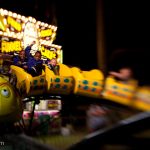 Like our Amelia Island vacation video, this was made with a still camera taking long bursts of photos. I used my Lensbaby for the blur effect. Special thanks to El Ten Eleven for making awesome music.