Richard B. Russell Jr. was a popular guy – not only did he serve as governor of Georgia from 1931-33, but he was a US Senator for almost 40 years. After his death he had all sorts of buildings, a road, a lake, a dam, an airport, a submarine, and yes, a state park named after him. That’s quite a legacy!

This state park’s main attraction is its 18-hole championship golf course, but you can guess that wasn’t what Trey and I were particularly interested in. We spent all of our time on a playground near the

banks of the lake and had a picnic lunch on the shore.

The park boasts that it has one of the oldest steel pin bridges in the area but when we went to see it, the trail leading to it was closed.  Just as well I guess since Trey was already pretty exhausted from climbing on the playground and running around on the beach. 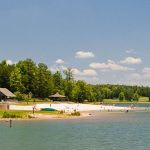 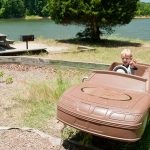 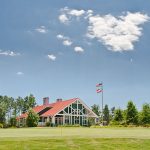 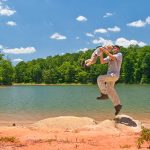