We tried visiting Hart State Park months ago, but ended up having to stay in a motel and skip it due to terrible weather. This time we arrived just in time  – as I spoke to the ranger I found out it was the last day the park would be a State Park. He was closing the office, the cottages were no longer being rented out, the campground would be self-registration & first-come-first-serve, and the park was being downgraded to a “State Outdoor Recreation Area”. All this is due to the severe budget cuts the state of Georgia has been making.

Trey and I hiked down a nature trail to Lake Hartwell and then followed the shoreline a bit. It was a blistering hot day and Trey really wanted to swim, so I stripped him down to his undies and let him splash around. The red clay under the water was a neat contrast to the bright blue skies above. 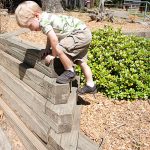 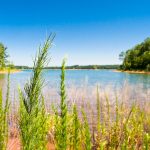 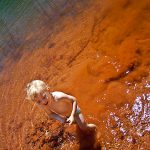 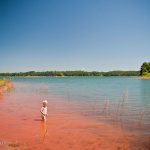 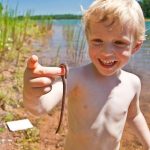