This state park has the most bizarre folklore behind it. At the top of Fort Mountain is an 855 foot wall made of non-native stone (i.e. somebody carried it up there) that varies from 2 to 6 feet high. No archeologists have been able to conclusively date the wall or pinpoint who built it. Theories abound as to who and why the stone fort was built.

The most popular theory combines Cherokee and Welsh folklore and claims that legendary Welsh prince Madoc discovered America in 1170 and settle in the Southeast. Supposedly those settlers are the “moon-eyed people” Cherokee myths describe and they were eventually absorbed by Native American groups before Columbus arrived a couple hundred years later. I highly recommend you check out some of the crazy legends of Prince Madoc. Other theories about who built the wall range from an albino race, ancient Hebrews, and Hernando de Soto.

Trey and I had a picnic and then hiked to the peak of Fort Mountain. I was impressed that Trey walked the entire way up without being carried; this trail was one the most strenuous and rugged that we’ve been on yet. We went to the overlook and had a spectacular view across the Chatsworth valley north of the mountain. Then we went to the very top where the CCC-built fire tower still stands. 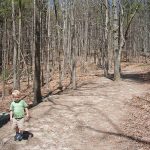 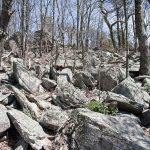 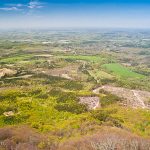 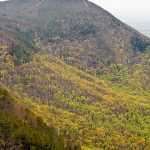 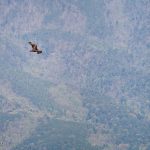 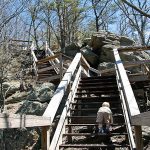 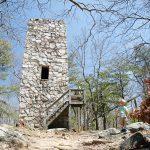 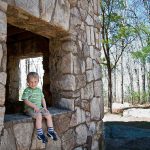