While we were in France, I used every opportunity that Trey and I were in the water to teach him to swim. I tried to challenge him a little more each time but in a fun way. He absolutely loved the beach, but we also played in the Darriet’s small above ground pool.

One day, we were joined by Alexandra and Nicolas. While they competed in breath-holding , Trey was watching closely. They left and Trey gave it a try. He had so much fun going underwater, eyes wide open, that he just kept going under again and again and again.

The next time he went to the beach with William he kept up his underwater antics and kept plunging under the water every chance he got. It’s good to see he’s getting a lot more comfortable with water. 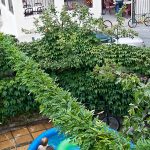 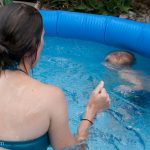 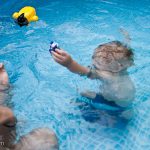 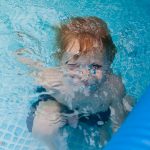 On Wednesday, while mommy and daddy went hiking up Pic Saint Loup with Frederic and Nicholas, Trey went to the aquarium with Madame Darriet. He had a blast.  When we finally returned from the hike, Trey burst into my room with such excitement. “Mommy, I went to the aquarium…and there was a biiiiiig shark.”

That night the town was having another running of the bulls as part of a week long festival. Unfortunately for the Darriets, the bulls are run around their block. This means they are trapped in their house and can’t park their car in the street during the event. In the photo to the left, you can see 3 boys climbing on the closest window on the right – Trey was in that room and slept right through the racket the bulls & boys were making right outside. 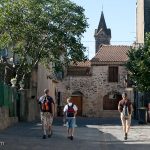 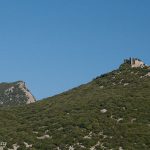 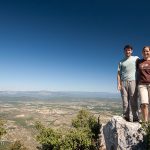 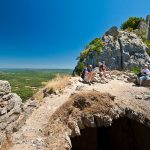 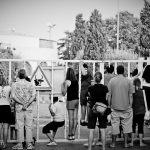 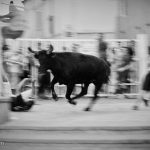 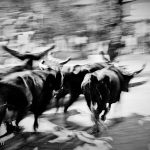 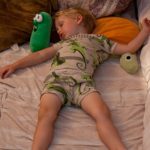 On Trey’s second day, we slept in late enough to get over the last of our jet lag.  After a late breakfast of delicious French pastries and coffee, we drove down the road to the village of Lattes. There we went on a nature walk and enjoyed picking the wild blackberries we found along the trail.

After lunch, we all went to the beach. Pérols is a suburb of Montpellier and is located right on lagoon. You just have to cross a bridge and you are at Carnon on the Mediterranean Sea. Since this is peak vacation season in France, the beach was packed.  To us, the topless rule on the beach seemed to be abused by those who really shouldn’t be bearing all. The water was very cold, but that didn’t stop Trey from enjoying himself. 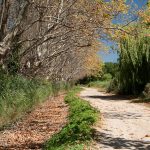 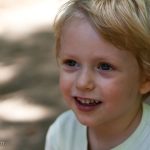 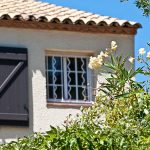 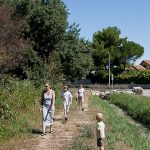 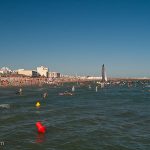 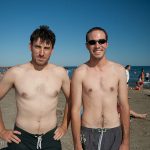 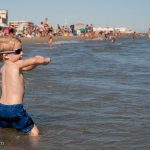 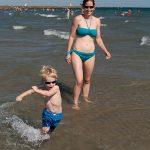 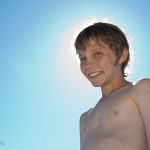 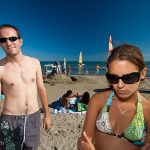 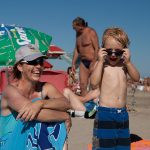 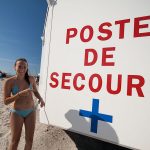 Trey and William arrived at the Montpelier airport around 1pm on Monday after a long overnight flight from Atlanta.  Considering the lack of sleep and discomfort of plane travel, they were both in pretty good spirits.  William led Trey just outside the doors of the baggage claim area to meet me. Trey had a finger in his nose and a blank stare until he saw me. It was so sweet.

We returned to the house for some lunch then walked over to the village arena to watch a game called “Taureau Piscine.” (Bull pool).  The youth of the town go into the arena with a young bull and try to persuade it to get in a centrally located makeshift pool.  Trey was more interested in playing with his (already) favorite pick of Nicholas’ old toys, a bulldozer.

Nicholas went for a swim in the family’s small above ground pool and Trey finally decided to get in once Nicholas was getting out. He had a blast.

Later on in the evening was an old fashioned clown and puppet show. However, it was not the most appropriate show for a three year-old (oversized-head Satan character and a decapitation of a marionette by another ghost marionette). We left.

Once Trey was tucked away in bed, William and I joined Helene and Frederick and Nicholas for an evening stroll down to the nearby lagoon.
END_OF_DOCUMENT_TOKEN_TO_BE_REPLACED

My baby boy turns 3 years old today. What an honor and a joy it has been to see him learn and grow and experience the world around him. He is inquisitive, rowdy, loving, agile, sweet, funny and simply the cutest kid ever. All the labor pains that it took to bring him into this world seem like mere scratches in comparison to the joy that he has brought us. Happy Birthday, Trey. We’ll pretend all the celebrating in Corsica is for you…and not for Napoleon.

We love you more than tongue can tell.

Anyone who follows this blog or knows William, knows that William is an incredible daddy.  He is adventurous (just look at their travels), funny (nothing greater than hearing Trey laugh with his daddy), loving (kissing many boo-boos) and creative  (coming up with new projects and ideas all the time…even in his sleep!) He is a great teacher and an inspiring role model for Trey.

William, thank you for giving Trey the best gift you can give…yourself.