The title says it all: “Bull Pool” Heidi translates it as “accident waiting to happen.” Our friends we visited in France live right next to the arena where all the bull-related events take place. One of those events is “taureau piscine” which is basically involves letting a young bull run around the arena full of kids. The kids try to get the bull into the pool. Apparently there is some sort of point system, but if it didn’t really matter since it was just chaos down there with kids running around.

We decided to let Trey just watch the game instead of participating (ha!). After the bulls had been put away Trey went down and played with his bulldozer/digger in the sand. He had just as much fun as the other kids and didn’t risk his life in the process. 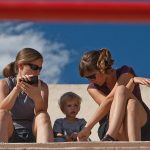 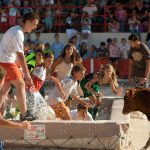 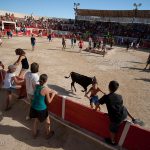 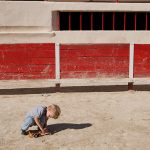