This park was a great surprise – we hadn’t planned on visiting it on the day we did. We were driving back home from Richard B. Russell State Park and I suddenly saw a sign that said Watson Mill Bridge was just a few miles away. So we turned off the highway and a short while later we were cooling off in the water of the South Fork River.

The bridge is Georgia’s longest covered bridge and was built in 1885 by the son of a freed slave. It is remarkable to see that a bridge built so long ago using wooden pins still holds up under the modern day vehicles that drive over it.

The park boasts of several miles worth of trails, but once Trey saw that we could go on the rocks and enjoy the water any thoughts of hiking were over. After walking across the bridge and exploring the river’s banks for a while, I had to give in and let Trey swim. We didn’t have our river shoes so we had to be extra careful on the slippery rocks. I took Trey up to the waterfall under the bridge but he was not a fan of the spray. Don’t know what his issue is with that – for the same reason we can never give him showers, only baths.

Click the image below to open a panoramic image in a new window: 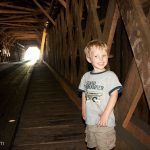 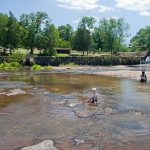 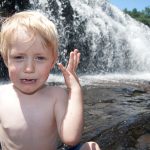 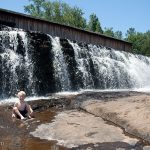